An underpass was constructed beneath the railway line at Carr Lane, Doncaster, on a new housing estate. This formed part of a £3.5 million investment by Network Rail to improve safety in the area.

An underpass was constructed beneath the railway line at Carr Lane, Doncaster, on a new housing estate. This formed part of a £3.5 million investment by Network Rail to improve safety in the area.

During and after construction of the new underpass, engineering and technical railway company Smarttrax Rail needed to constantly monitor a section of the railway to identify any movement.

Some form of monitoring system was required to immediately alert Smarttrax Rail if there were any track alterations such as twist, cant or settlement or changes in the water level during the construction work. This was essential as digging holes and driving piles into the ground can have major structural impact and could have affected the railway above. Due to the nature of the ground that the subway passed through, the track required monitoring three times a day.

Sunbelt Rentals Survey devised a monitoring and measuring solution for Smarttrax Rail to detect any movement or track alterations during construction of the underpass and after settlement. Two Leica TM50 Total Stations were hired for a total of 20 weeks to monitor environmental and structural movements down to millimetre and submillimetre accuracy. 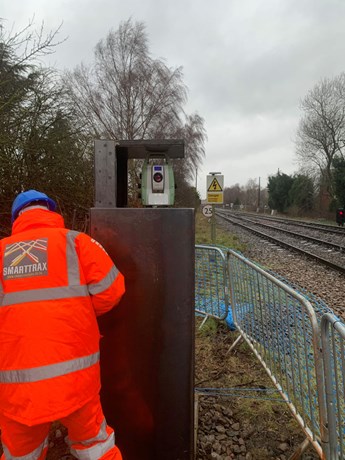 Smarttrax Rail installed a series of prisms to the rail at 3-metre intervals throughout the site and established a survey baseline with the Total Stations which were set up on-site within bespoke security containers to allow remote monitoring. The instruments were set up to take measurements three times a day and these were then relayed back to the office. This meant that the measurements were automatically taken without needing to
have any personnel on site.

As well as the two Total Stations, we provided two Leica Monitoring ComBox units incorporating Leica ComGate10 to provide communication from the sensors in the field to the internet. The ComBox units were remote controlled via Leica’s GeoMos monitoring software installed on a remote server. GeoMos has an in-built alerting system so if there are any issues or significant movements, the client is immediately notified via email or text.

This solution allowed Smarttrax Rail to have full control of the Total Stations from a remote location and also receive valuable data and measurements. The track monitoring results were collated by a Smarttrax engineer for assessment and a report was sent out daily to give assurances to all parties involved with the excavation works that they were not affecting the safe running of trains.

We were able to provide the perfect tools for the job, allowing the client to record measurements several times a day without having to visit the site constantly. Smarttrax Rail could leave the equipment running and focus on the next job.

The surveying equipment we provided for this project supplied Smarttrax Rail with track monitoring results to millimetre and sub-millimetre accuracy indicating any movement of the stretch of the rail in real time. Smarttrax Rail now has accurately recorded data of how much the railway moved naturally before construction of the underpass and if it moved during and after construction.

We were extremely happy with the equipment and service provided by Sunbelt Rentals Survey. The equipment helped us to monitor any movement of the track throughout the 20-week duration of the project.