We have the unique experience, expertise and product range to service the UK’s most high profile events and infrastructure projects.

Our team is extremely proud to have played a major part in the success of the Glastonbury Festival by delivering vital infrastructure services and equipment to the event for over 40 years. The installation services provided are an essential component of the operating licence being granted and ensures one of the greatest shows on earth can happen.

As the largest greenfield music and performing arts festival in the world, Glastonbury was established in 1970, becoming an annual fixture in the 1980’s and growing to become the major event in British culture it is today.

Glastonbury does have fallow years. These are taken mostly at five-year intervals and are intended to give the land and local population a break as the festival attracts hundreds of thousands of visitors each time, with the peak set at 300,000.

Since 1983, large festivals have required licences from local authorities. This led to certain restrictions being placed on the festival, including a crowd limit. However, 1994 saw the attendance rise drastically due to the security fence being breached, with estimates suggesting there may have been enough fence-jumpers to double the size of people in attendance.

This posed significant security and safety issues. Alongside the influx of visitor numbers causing disruption to local villagers. It meant the future of the festival was called into question. It was vital a sustainable solution was found and that improvements continued to be made as the festival evolved.

Our team worked closely with the festival organisers to design and build a new system that was virtually impenetrable.

At each Glastonbury we work with the event organisers to ensure the site is set up and temporary infrastructure in place on time and to exacting standards. Due to the time critical setup many of our team take residence onsite providing total support – equating to 25,000 hours given each year the festival runs.

To help ensure the continued future of Glastonbury Festival, by stopping illegal entry into the site and providing a safe environment for legitimate festival goers, we designed and developed their formidable Super Fortress Fence – a real solution to control the huge site.

Standing at 4.12m high and 7.8km long, the fence has unique high security features including an attached external roadway to prevent tunnelling, 45-degree overhangs to prevent climbing and zero nuts and bolts to stop the fence being tampered with.

We now provide more than 8,000 metres of Super Fortress Fence around the perimeter of the site, together with the same 8km of interior mesh fence. This has made the site secure and enabled Glastonbury to continue to obtain its operating licence. In its first year of use it also significantly reduced crime levels compared to previous years. 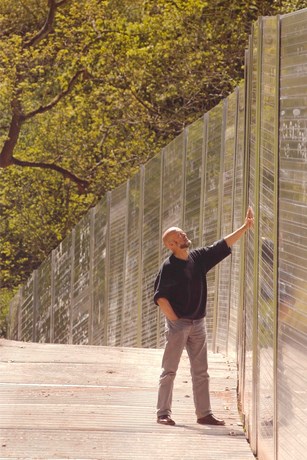 The fence has also become an icon of the festival itself as it is adorned with artworks by Banksy. It is almost as recognisable as the Pyramid stage as a symbol of the post millennium Glastonbury.

Taking its social impact responsibilities seriously, our team has also drastically reduced CO2 emissions and disruption to the local community by investing in a fence storage facility near to the venue. This has meant hundreds of lorry journeys can now be avoided.

As well as the Super Fortress Fence, we also supply the festival with almost 20km of temporary roadways, 14km of additional fencing, eight bridges, crowd control barriers and pedestrian walkways. This vital equipment ensures the organisers, contractors, security and festival goers can move around the site safely.

We pride ourselves on our innovative approach to complex projects like Glastonbury. It is the largest event contract with a vast range of access products being used and it requires in-depth planning and project management. All of our team who have been involved with Glastonbury over the years work tirelessly to ensure the success of the Festival and this enables us to continue the collaborative and successful relationship with the Glastonbury Festival team each year.

Sunbelt’s Super Fortress Fence has inspired and enthused a global audience and helped to secure Glastonbury Festival a 10-year licence. When the fence goes up, the festival build begins and Sunbelt has played a big part in its continuing success. Sunbelt is high up the priority list at Glastonbury. We use Trakway across the greenfield site and it sews everything together, for the build and the out as well. Sunbelt is always a very good team that hits its considerable targets ahead of the deadline.